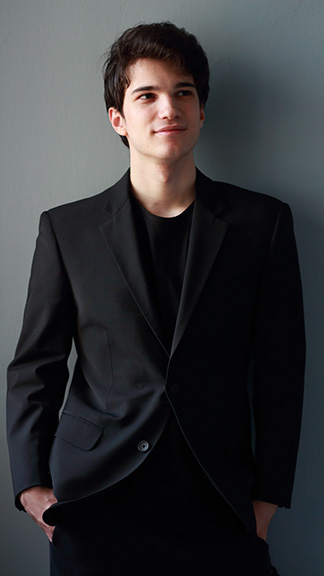 Matteo has also developed a vast piano repertoire that he has had the opportunity to perform in numerous recitals in prestigious halls, among others Palazzo Chigi Saracini (Accademia Chigiana, Siena), Sony Auditorium in Madrid, Casa de las Flores del Palacio de la Granja de San Ildefonso in Segovia, Canary Islands Autumn Music Festival, Gloggnitz Theater (Austria), Malaga Town Hall, Ateneo de Valencia, Consulate of Portugal in Seville, Ateneo de Madrid. At 21, he inaugurated the Scherzo Foundation’s Cycle Jóvenes Intérpretes at the National Auditorium in Madrid. He recently has partecipated with a recital at the Maggio della Musica 2022 festival in Villa Pignatelli, Naples, and at Bastia Classica Piano Fest, Auditorium Sant’Angelo, Bastia Umbra (Italy). He has also inaugurated the season of the Amici della Musica di Foligno society with an opening recital at the San Domenico Auditorium in Foligno (Italy). Among his upcoming appointments stand out two recitals in Berlin and Madrid.

His activity in different formations of chamber groups has also been notable, such as the Deloitte Mozart Trio (with performances at the Teatro Real and the Real Casino in Madrid) or in a duo with the violinist Javier Comesaña (Cycle Noches en los Jardines del Alcázar in the Reales Alcázares of Seville), with whom he will perform 2023 in the Beethoven-Haus (Bonn), in the Laeiszhalle (Hamburg) and in the Unione Musicale (Turin).

Essential in its beginnings was the pianist Ruzan Badalian at the Teresa Berganza Conservatory in Madrid. He has been a private student of pianist Ana Guijarro, Professor Emeritus and Director of the Royal Conservatory of Madrid. Between 2017 and 2021, he studied a Bachelor of Arts in Piano Performance with maestro Dmitri Bashkirov as a scholarship student at the Reina Sofía School of Music in Madrid, where he received in 2021 the Higher Degree in Higher Artistic Music Education, specializing in piano performance. In 2022 he began his Master’s studies at the Musikhochschule Hanns Eisler in Berlin, with professor Birgitta Wollenbewer.